My French hosts had set me adrift in Paris at the age of fourteen. I was resourceful, thank goodness, and relieved that I wouldn’t have to hang out with the family, but part of me wondered about the manners of hosts who invited people to stay and then ignored them. 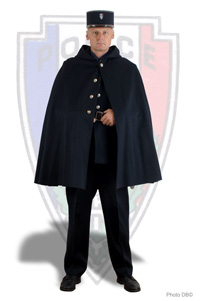 I began to explore the city by myself. My mother had given me her pre-war guide to Paris, and not much had changed. But on the Champs Elysées I did stop to ask a gendarme the way. I wasn’t really lost. I just wanted to speak to this typical policeman, dressed in his short cape and smart peaked hat, his képi. He had a moustache, too, luckily. I needed the locals to be French, for heaven’s sake.

I couldn’t afford to spend much on food, so I bought a baguette with ham in it for lunch. Why had Miss Ruhl, my French teacher, who’d known so much about France, never mentioned the fact that the sandwiches of her homeland didn’t have butter?

I found the Eiffel Tower and the Arc de Triomphe, walking for a long time in this very walkable city.

I stared at butchers’ showcases, where the meat was rolled into tubes and tied with string, or trussed up into something called paupiettes de veau, shaped like small pumpkins. Where were the chops, roasts and legs of lamb? What were those round things with small bones sticking out of the top, each bone with a tiny paper chef’s hat on it? It was a foreign land, for sure.

The bakeries were another amazement.  I’d heard of patisserie, but always imagined it was like the cake section of the ones at home, with cream puffs, sticky buns, and eclairs, obviously. They had eclairs here too (it dawned on me they might have been invented here). But there were other glories; the small, exquisite cakes with not a crumb out of place, were mouth-wateringly different. There were individual strawberry tarts with real strawberries, not jam, and enormous meringues dusted with flaked almonds.

I was enjoying myself, but by mid-afternoon, the thought of having to sleep in a cupboard for a week and eating black olives with the other de Beaumont children was daunting. I made a decision.

I managed to find the cosmetics counter at the Galeries Lafayette, the department store where my mother’s friend, Irena, was working. I explained my dilemma as she packed a few échantillons (I loved to learn useful new words – this one meant samples) into a small bag saying Lancôme.

“You must come and stay with me,” she said immediately. “My apartment is small, and not in the fashionable quarter, but it will be more fun,”

Her lodgings weren’t small, they were tiny. Irena had settled in Paris from Poland, via a six month stay at our small flat in London, and this was all she could afford. She was another friend of friends, but we’d liked her from the start. Newly divorced at 35, she had left her daughter behind with her parents, until such time as she could manage to bring her to the West. She was a civil engineer by profession, and so she wasn’t working, was busy learning French at the Alliance Francaise, a prerequisite for a job in her field.

The rue Juliette Lamber was in the unfashionable 17th arrondissement, but was served by the Metro. Irena taught me how to purchase a book of ten tickets, to save money on the fare. The street was nothing very special, but had plaster-fronted buildings, embellished with small Parisian balconies, that ran the length of it.

We walked through the wooden doorway, causing the old concierge, who lived in her rooms on the ground floor, to emerge from hiding. I caught a glimpse of her untidy parlor, with an armchair sporting a crocheted anti-Macassar, and could hear the television blaring an early evening program. Having ascertained that Irena lived there and I would simply be visiting for a few days, she retreated to her lair.

We trudged up to the sixth, and top floor of the building, where my friend occupied one room and a kitchenette. She shared a bathroom with the neighbor across the hall – this was an old building. The stairs had become narrower and the ceilings lower as we went up, and now we were in the garret. Tall glass windows overlooked a courtyard far below and were protected by wrought iron balconies too small to stand on. I was, almost literally, in heaven.

Irena led me to the local boulangerie, and the market, where she picked up fruit and vegetables, demanded samples of the various cheeses to taste and always bought something simple and delicious for dinner. She introduced me to the citron pressé, freshly-squeezed lemon juice in a tall glass with a little sugar. I found it very refreshing and inexpensive when I wanted to sit in a café and watch people go by. I still spent some of the day on my own, but I knew there’d be a warm welcome when I returned. And in my small interactions with locals, in shops and the Métro, or asking the way, I began to feel almost like a local, rather than someone who was merely tolerated by them.

I was very young when I fell in love with Paris during that first visit to France. So many decades later, I’m aware the city has changed with the times, and I notice the absence of Gauloise smoke in the air. But if I sit in a café with a citron pressé, I might as well be fourteen and in love again.