Like many people around the world, especially perhaps those of us who grew up in Britain but now live elsewhere, I felt a sense of loss when I heard that our Queen had died. The news destroyed my stiff upper lip completely, and I cried for the Queen who’d been part of my life since I was very young. 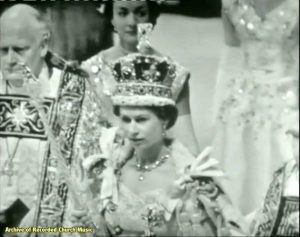 My mother and I watched her 1953 coronation on the television my grandfather had bought for us – the only one on our street. I was three, and daresay became bored, but Mummy sat entranced. I discovered later that she’d actually attended the coronation of Elizabeth’s father, George VI, in Westminster Abbey in 1937 – not because she told us, but because I found her invitation and ticket after she died.

I saw Queen Elizabeth a couple of times in person. Once, in my early teens, when she came to visit the historical monument where my mother worked. But a few years later, I missed out on the royal garden party that my mother attended with my sisters. The invitation said unmarried daughters would be welcome, but I’d already burned my boats and was the married mother of a baby boy. My resentful pleas of “But she’ll never know!” fell on deaf ears.

In the late eighties, I was leading a small group of Americans on a theatre tour of London, and we’d arrived on a Saturday evening in November. The following day, all the theatres and many of the attractions were closed in honor of Armistice Day (Veteran’s Day here in the US). 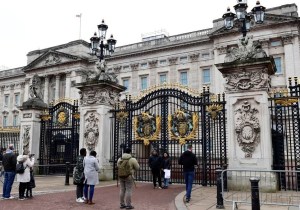 I proposed we walk through Piccadilly Circus and through St James’ Park to Buckingham Palace. A faint drizzle made the air damp as we walked, but my tourists proved to be good sports. On the way though, I heard some republican murmurs from my group. “What’s so great about having a Queen?” and “That family are a bunch of royally spoiled brats…”

We were among the few in front of the Palace, and nothing much appeared to be happening, so I suggested we continue walking toward Trafalgar Square. At that moment, a young policeman in his tall helmet walked up and said, “Don’t leave yet. They’re on their way back.” I must have looked blank, because he continued, “The whole family is on its way here from laying wreaths at the Cenotaph.”

He was talking about London’s tomb of the unknown soldier. 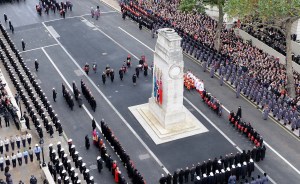 I’d forgotten that every year at eleven minutes past the eleventh hour of the eleventh Day of the eleventh month – the day the fighting of World War 1 ceased – the Royal Family went there to honor Britain’s fallen warriors. As a child in the fifties, we observed a two minutes’ silence at that time of day, all traffic stopped, and life seemed to come to a halt as we remembered.

But today, the drizzle was clearing, and along the Mall, I could see the Royal motorcade approaching. Now even my naysayers were excited. As we waited by the open gates, they drove slowly through – the Queen, Prince Philip, Charles, Diana, Princess Anne, Princes Edward and Andrew – all in black, which made their faces stand out against the dark interior of the cars.

They waved at our small group – we were practically the only people there – and my Americans waved back with enthusiasm and huge smiles. That’s the effect the Queen had on people. No matter whether one’s sympathies were royalist or republican, the woman herself was the nation’s mother and grandmother – always calm, dignified, and ready with a smile. How could one not smile back?

Barbara Conrey – Where I Write