November get-together began with a discussion of the recent election. Having got that off our collective chest, we agreed writing might be a way to deal with the situation. With that in mind, there’s plenty going on in the writing world. 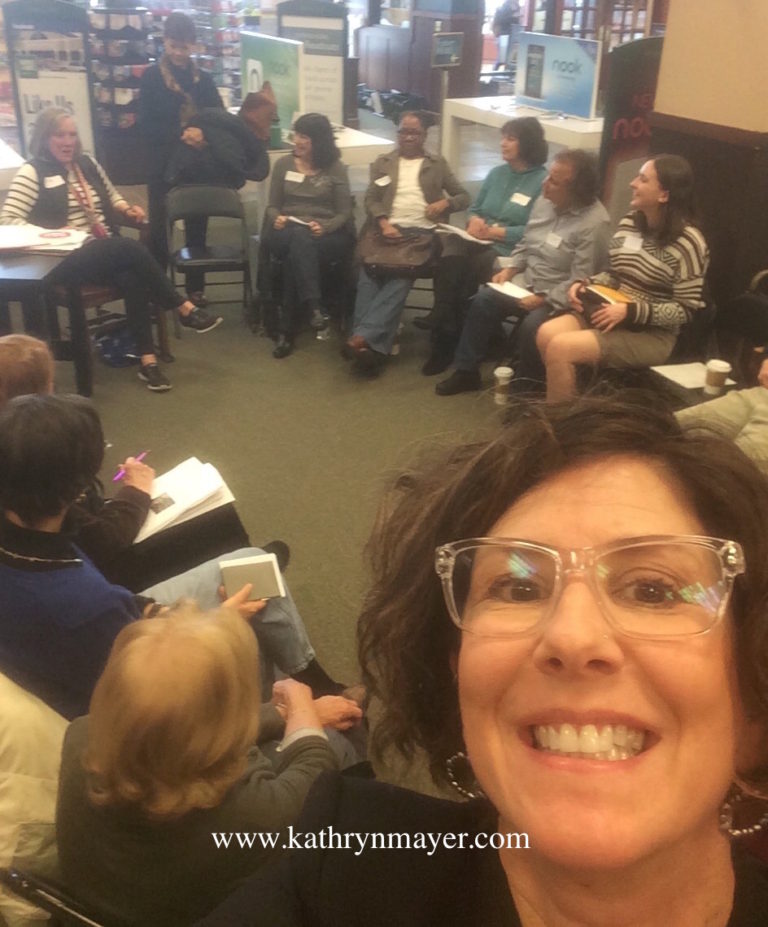 First, I need to thank Kate Mayer for her great blog post about holding oneself accountable. She’s been writing a blog post a day throughout November as a challenge to herself, which I know she’s going to complete. She gives the Rendezvous some credit for helping her achieve her goals, and I know our meetings have something to do with it, because she’s not the only one. Reason enough to show up!
On December 16, the Fairfield Public Library will be hosting a  one-day (9-5) panel, So You Want to Write a Children’s Book  featuring Patricia Reilly Giff, Susan Hood, Susan Ross, Christine Pakkala and former workshop instructor Michaela MacColl, Rosemary Wells, Tony Abbott and about a dozen other top names in children’s publishing. Free, but you need to register.
If you’re writing for children, FCWS is offering a class beginning on December 2, Writing for Middle Graders and Young Adults. Taught by Nora Raleigh Baskin, the six classes will run for seven weeks (not on the 16th – see above) on Fridays, 12 – 2 p.m.
A propos, it’s time to sign up for new writing classes/workshops if you’re interested. All three Westport sources are offering them, so check them out here:
Fairfield County Writers’ Studio  Among these is a session taught by Beth Levine, one of our members, on writing for magazines
Westport Writers’ Workshop
Write Yourself Free
Byrd’s Books in Bethel runs a series of classes on writing by Judith Marks-White. The next one is on December 4, at 3pm, and costs $20. Email events@ByrdsBooks.com or call (203) 730-2973 for moe information.
The magazine Poets & Writers, is holding a conference: Inspiration, in San Francisco on January 14-15, 2017. (Feels strange to be moving into 2017 already…)  It’s far from here, of course, but their line-up of speakers includes Juan Felipe Herrera; best-selling novelist and author of Purity, Jonathan Franzen; New Yorker staff writer and author of The Orchid Thief, Susan Orlean; acclaimed poet and former United States Poet Laureate Kay Ryan; writer and activist Ishmael Reed; and renowned poet Jane Hirshfield. And the Early bird registration (up to December 4) is only $175. You can’t beat that.
Here’s an interesting article on 9 Important Legal T ips For Self-Publishing Memoir And Nonfiction. It’s from Self-publishing Relief, and offshoot of Writers’ Relief, and worth a read.
And if you are self-publishing, here are some books on how to deal with copyright:  How Authors Sell Publishing Rights, by Orna Ross and Helen Sedwick; The Copyright Handbook and Kris Rusch’s Business blog posts. Kris also has a new book on Contracts coming out soon. Ross and Sedwick have also produced a podcast to help you get started, called Business Mindset Means a Rights Mindset.
Creative Non-Fiction is calling for submissions on a variety of topics for upcoming issues. They include science and religion; adapting to new situations; real life Frankenstein stories; and stories for their new monthly True Story publication (one story of 5-10,00 words per issue).
Kate Mayer also told us about attending Bindercon, the conference and community for women and gender variant writers. (I feel very clued in just typing that.) It’s a bi-coastal conference, and Kate went to the NYC one at the end of October. There’s another in LA from April 1-2, if you’re in that neck of the woods. For more info about the organization and the conference, click here, or check their Facebook page.
Writers Read is taking place on Tuesday, December 6, at the Fairfield Public Library from 7-9. It will be the last one hosted by Alex McNab, so I’d love you to come, even if not to read, to say thanks to Alex for hosting it for so long. Because of the way the days fall in December, the Writers’ Salon will be ther eon the 2nd, from 4-6. Hope to see you there.
At the halfway mark for NaNoWriMo, I keep bumping into people who are giving it a go. I did mine a few years ago, and I recommend it as a great way to learn to write without self-censoring. When I printed out the first draft, I made a title page ‘Horrible First Draft’, which it was. But at least I had a novel to work on. Among the writers I’ve run into are Tessa McGovern, of the Fairfield County Writers’ Studio, who’s also helped organize a series of events for NaNo writers at the Westport Library – putting her money where her mouth is, I guess. She was right on schedule with her novel.
At a talk given by the redoubtable Alice Mattison on Thursday, I was able to encourage a poet who was writing a novel and had got to the ‘Oh my god, this will never work,’ stage. She looked a bit more cheerful after, I think.
And yesterday I met a 13-year-old, working on her second one, which according to her teacher, contains inappropriate material (underage drinking) and is too gory (vampires will do that…). Sounds good.
Have a great Thanksgiving!