I caught another raccoon in my garden the other day. Which reminded me of the last time I had this problem, many years ago, in a different place. I wrote a humorous essay about it and won a prize from Connecticut Muse, a journal for Connecticut writers. I thought you might enjoy it too. (3-4 minute read) 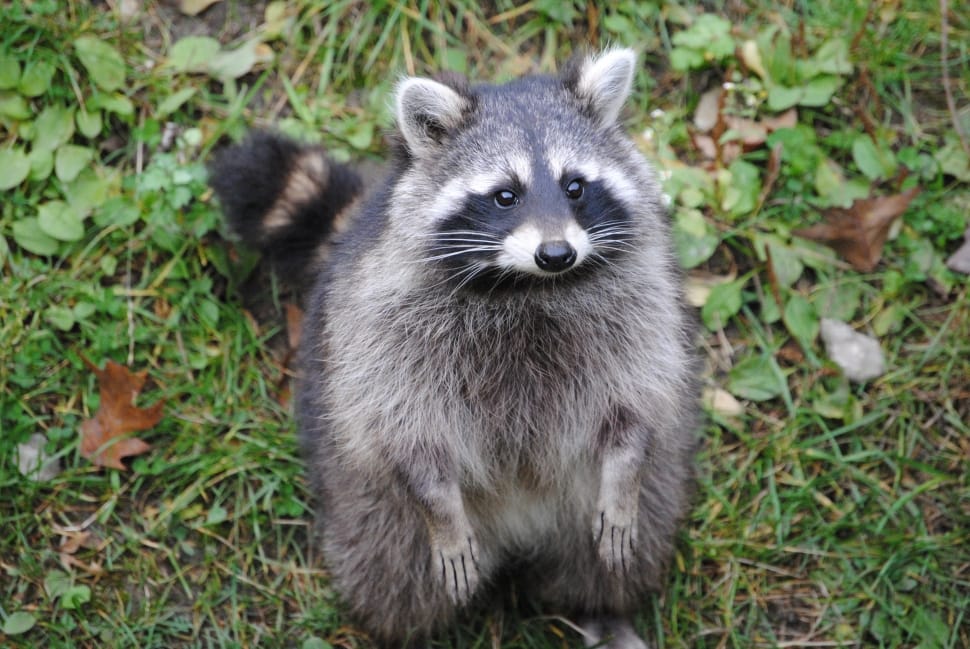 Raffles, the gentleman thief, had been fairly unobtrusive until he started breaking into our home, unannounced, in the early hours of the morning. He would come stealing through the cat-flap and head straight for our dog Dougal’s bowl. Apparently approving of the contents, he would finish them, then sashay over to the cat’s bowl and eat that food, too. The birdseed stored in the mudroom was just dessert.

We were no fools. We knew how to deal with raccoons like Raffles. We battened down the hatches, shut the cat flap, closed the garage doors, and prepared to repel all boarders. Ziggy, our cat, finding his own door locked against him, had to learn how to climb the holly tree up to Older Son’s bedroom window and sneak in over the chest of drawers, before reaching his favorite sleeping spot on the living room sofa. No ring-tailed outsider would get the best of him.  For a while, Raffles was discouraged. But evidently, he pined for Dougal’s premium dog food. So he started spying on us, waiting for his chance.

For our part, we did what all guards are apt to do when things are quiet – we became careless. It was the little slips that Raffles was waiting for. Perhaps a garage door not checked before sleep. Possibly a cat flap left open in a moment of recklessness. And so, one evening, we returned to our darkened house from a delightful dinner at a local hostelry to find Raffles, staring at us insolently from the breakfast nook at the far side of the kitchen. The kitchen had sliding doors that led out to the deck. My better half was determined to get the best of this opponent. Wielding a sturdy broom, he advanced upon Raffles and adroitly opened the sliding door while attempting to sweep our visitor through it and onto the deck. But Raffles was not to be ordered about. Ignoring the open door, he made a dash for the relative safety of the pots of bougainvillea and lavender, which were overwintering inside. Finding no sanctuary there, Raffles made a super-raccoon effort, pulled himself together, and ran between our legs to make it out through the cat-flap unscathed.

We needed new tactics. Friends suggested we leave the garage lights on and play loud music to scare Raffles away. Personally, I think he actually liked the Classic Rock station. A few days later, Better Half cracked, when, only moments after leaving the house for work, he staggered in from the garage trailing the contents of yesterday’s garbage bag, and with an oath, swore that either Raffles went, or he did.

I telephoned a man in Litchfield County, who promised to bring over a Have-A-Heart trap, which would catch Raffles without hurting him. Litchfield Man arrived a couple of days later, and set up the trap in the garage, next to the garbage cans. He baited it with Gourmet Raccoon Food.

It would be irresistible to discerning raccoons, he assured me. He covered the cage with black plastic, so as to disguise it from the marauder, and set it carefully down next to the garbage cans.

“Call me when you catch it,” were his parting words.

I called him the next day. The garbage collector had taken the trap away with the garbage.

Litchfield Man returned two days later with another trap. His smile was a trifle strained, I thought, but he set up the new trap, identical to the last one, except that, this time, I added a large label to the top: Do Not Remove!

Feeling that I had done all I could reasonably be expected to do, I left town for a few days to visit my mother. On my return, Younger Son looked at me accusingly as he told me that the trap had worked. I was intrigued. The cage looked different somehow, but I couldn’t see anything inside.

“It was the cat that got trapped,” he explained. “I let it out this morning.”

I apologized to the cat. This was all too much trouble. Raffles seemed to intuit my craven thoughts. And next morning our garbage was strewn all over the garage again.

We were having a party at our house the next day. I couldn’t let Raffles spoil that. But I didn’t have the nerve to summon Litchfield Man again. So I reset the trap myself. It was easy, really, once I found out how to get my arm back when it got trapped. I removed the dried-up remains of Gourmet Raccoon food and decided that perhaps Raffles might enjoy something less Gourmet Raccoon, and more Working Raccoon in taste, like peanut butter. I covered the trap with a black garbage bag, went back inside, and waited.

I called Litchfield Man immediately, and with pride in my voice, recounted at some length how I had reset the trap and caught Raffles on my first try with peanut butter. What should I do now? A short pause ensued.

“Litchfield Man is away for the weekend, this is the answering service. I’ll have him call you.”

I must say that Litchfield Man was very nice about it when he called back from somewhere in New England. He sympathized with the fact that I didn’t really want Raffles ricocheting around the garage in his humane trap all night. When I told him that Raffles had eaten the black plastic covering, he suggested I take an old towel, cover the cage, and carry it into the garden. Putting on Better Half’s thickest working gloves (I felt he ought to contribute to this project somehow), I did as instructed. After warily pushing some slices of apple into the cage as a thirst-quenching snack, I left Raffles, resentful but resigned, to sleep peacefully until the next day. A couple of hours later I thought I’d check on him just to make sure he was OK.

The apple was untouched, but he’d eaten the towel.

Litchfield Man came on Monday and drove Raffles away, and, though I was relieved to see him go, I felt a bit sad, too. Until I heard his parting words.

“Call me when his friends come over,” he said cheerily.

I don’t think I will. Instead, I’m simply going to leave a pot of peanut butter outside the garage every night. That’ll take care of Raffles’ friends.