Pamela Stockwell is a

fellow member of the Women’s Fiction Writers Association, which is not for writers who are women, but those who write in the womens’ fiction genre. Her debut novel, A Boundless Place, launches this Thursday, and the premise is fascinating. In 1969, a twenty-four-year-old widow, Violet, wants only to hide from life. But her seven-year-old neighbor, Arabella, enlists her in the rescue of the cantankerous old woman next door who has fallen ill. Soon she’s entangled in the lives of several neighbors from grumpy Mr. Pritchard to the handsome GI across the street. You’ll have to read it to find out what happens next. Since I’m always interested in where books get written, I asked Pamela where she wrote this book.

Writing a novel has been a dream of mine since I was about seven, but I may have gotten a bit sidetracked since, fifty-one years later, I am just now publishing my debut novel. I started a book in my early thirties, but my husband and I adopted three kids and, while I know people write novels and have kids, I could not. My brain was filled with how to keep them busy and healthy (maybe not in that order), rather than plot lines and character arcs. It wasn’t until my oldest daughter started driving that I found a little space had opened up in my day and in my head, and I began to write.

I started off writing in our office/junk room/guest room, but as I got more serious, I decided a little decluttering and redecorating was in order. A fresh coat of paint, new window treatments, some new decor, and voilà, I created the perfect writer’s lair.

It worked for two years. I finished my debut novel, A Boundless Place, there. But when the 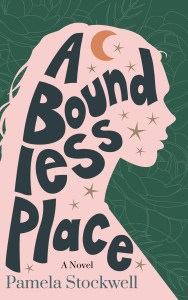 pandemic hit, my two college-age kids moved home. Everyone was Zooming or Google-meeting, so I gave up my office with its door and created a new corner in our downstairs den. And it was there that I wrote the first drafts of my next two novels, as well as some poetry. I discovered creativity is not dependent on location but on determination. Sometimes I wish it was the location, because maybe that would prevent me from staring out the window at the ever-changing sky pondering the meaning of life. Or what I should make for dinner.

But now I know I can write at my desk, in my lair, in a coffee shop, or anywhere. In a box, with a fox. You get the idea. Writing is my happy place, no matter where I set down my computer.

You can find out more about Pamela and her book by attending her virtual launch on Wednesday, October 27, at 8 pm ET. You can register here to get the link. Or you can follow her on Twitter, Facebook, or Instagram.