My name is not always Gabi Coatsworth

It was my husband, Jay. He kept asking me why I didn’t use my proper name when I was writing. According to the US Passport office and Social Security, my name is Gabi Coatsworth Wilson. And he was never thrilled about the Coatsworth part. That’s because Coatsworth was the name of my first husband. 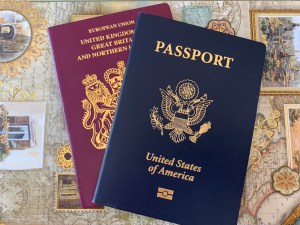 Here’s the thing. When I divorced that husband, I kept the name Coatsworth, because my maiden name (was I ever a maiden…?) was Grajnert. It was a German name that had been Polonised over the years from Greinert to Grajnert – same pronunciation, different spelling. No-one in England could pronounce it when I was growing up, and Coatsworth was such a relief – it sounded so British, and people knew how to say it.

Then I moved to the US and married Jay – or more properly, William J. Wilson, and the world became more complicated. At first, I was thrilled to be Mrs. W.J. Wilson. But my kids’ teachers insisted on calling me Ms. Coatsworth whenever they called me to report some new piece of erratic behavior. I think Jay was quite glad that the Wilson name wasn’t being tarnished as a result.

Then I got a job at British Airways. I’d applied as Gabi Coatsworth because that was the name on my resume, and I had a reputation of sorts. Jay complained:

“You’ve got the job – why don’t you tell them your real name is Wilson?” he said.

I checked the British Airways phone list for the USA. There were 12 Wilsons in it already. And no Coatsworth. So that decision was easy.

When I started writing, Jay was thrilled. No more resumes, he figured.

“Now you can be Gabi Wilson,” he pointed out.

I had something to point out to him.

“Wilson,” I explained, “is near the end of the alphabet. I don’t want my bestselling books to be shelved so low that people will have to crouch to find them. It’s so…undignified.”

“On the other hand,” I continued, “Coatsworth comes near the beginning of the alphabet, and will be displayed higher up. Besides,” I said and this clinched it for me – “I’m only competing with Elizabeth Coatsworth. She wrote children’s books and died in 1986, so essentially I’ll have Coatsworth to myself.”

My husband died some years ago and in some circles, I still bear his last name. But have you googled Gabi Wilson recently? She changed her name too, and is now better known as H.E.R.

Here she is – multi-talented singer, songwriter, a musician with a great bluesy voice. She was about 14 when I first came across her, and I knew she’d go places. Her fans would leave messages on my phone telling her how much they loved her. And she’s just won the 2021 Grammy for best song. She’s had nominations for Critics Choice Awards, and maybe an Oscar this year for best original song. So…

She’s fabulous. But I could never hope to compete with her….Listen to this.

And Holy Cow – now I hear she published a book of poems Anything on Earth Poems when she was eight!

So, a veritable child prodigy. But I don’t despair. People will have to crouch down to find that book…