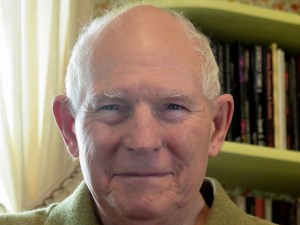 Internationally published poet and short fiction writer Edward Ahern has an output I have long given up trying to emulate. When he arrives at the Writers Rendezvous and I ask him what he’s done in the previous month, I know he’ll have not only written but submitted (and had accepted) a huge number of pieces. His short fiction has been featured in over fifty anthologies, and he’s published three books of stories, including Capricious Visions. His most recent award-winning book of poetry is Irregular Images. Clearly, he spends a lot of time writing. Here’s where he does it: 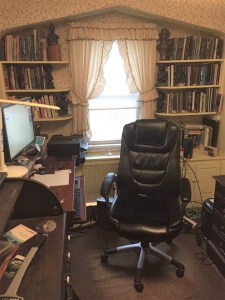 The room is perhaps 9’ x 15’, almost edging out the bathrooms in smallness. I write everything there; poems, fiction, emails, Twitter self-promotions, everything. When not writing I spend at least an hour and a half a day authoring- submitting, revising, editing for two magazines. I spend much more time staring at the 17” screen than I do looking at my wife. 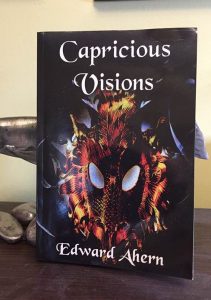 Framing the window are six bookshelves. Four of them are filled with books I’m either contained in or have written. I don’t think I’ve completely read any of them, other than my own. The low shelf on the right holds an atlas, an unabridged dictionary, and French, German, and Japanese dictionaries. The low shelf on the left, behind the printer, holds stacks of books I’ve sworn to read and actually have, some of them. The top left shelf holds fishing books, mostly read, because I don’t know where else to put them. The next to bottom left-hand shelf holds books on writing, all of which I’ve read, almost none of which I’ve reread.

The room is defined by silence. Music was tried and found distractive. I don’t talk to myself. The only soft noises are passing children and dogs, and the rustling sparrows in residence just outside the window. As a former city room reporter and corporate marketer, I can write well when it’s noisy, but the stillness better keeps me in creative brood.
I occasionally think about renting a shack on the Provincetown dunes, the ones without running water and electricity, but know that I’d be prowling the sand or fishing the surf instead of writing. My muse may provide inferior ideas, but she’s a consistent and frequent contributor to my little workplace.
When the muse checks out for a while, I’ll turn to reading agents’ enthusiastically disinterested responses to my queries for my unpublished novel, The Will of the Wisp.

My name is not always Gabi Coatsworth

Where I write – Bette Bono