I had to cut this scene from the memoir, for reasons of length – but I think you might enjoy it…

When the movers’ truck pulled up in front of the house in Fairfield, Connecticut, a week after we’d arrived from Chicago in June 1983, I couldn’t wait to see how my furniture would look in our new home.

Maybe the irregular shape of some of the rooms contributed to this, or perhaps I was having trouble assimilating the things Jay brought with him from his first marriage. Unlike mine, an eclectic mix of family antiques and the folding items bought in Chicago, Jay’s tended to be heavier, reproduction, and a bit shabby.

We put my folding coffee table in the living room, and used my great-aunt’s small mahogany one, with my canvas director’s chairs, to eat at for the first week or two. “We need to furnish the dining room,” Jay decided. “Let’s go check out some tag sales.”

These were the Connecticut equivalent of garage sales in Evanston, where I’d searched for chests of drawers, side tables, and extra seating after coming to America. Jay had so much fun buying and selling that before we left Chicago, he helped me organize a sale on the front porch of my house, practically giving away some of my lucky finds, to my chagrin.

Every weekend, as we ran errands around Fairfield, he’d be on the lookout for a sign at the side of the road. Noticing one, he’d slam on the brakes, and we’d proceed to the garage to hunt for things we needed. We found estate sales were the most interesting – Jay because he liked the better-quality items, while I enjoyed checking out other people’s homes.

As he pulled over one morning on a narrow road overlooking Southport Harbor, I sighed, because we’d been on our way to find a sofa in a local department store. I knew attempting to stop him was like trying to restrain a dog who’s just spotted a promising squirrel.

So, I trudged down the steep drive behind him, glad the waterfront house was small, so this would be over fast. In fact, it turned out to be larger than it appeared, and soon Jay was browsing through the house while I admired the views from each window. I lost track of him for a while, but he suddenly reappeared at my elbow and grabbed my hand. “Look what I’ve found,” he said in a stage whisper, as he led me into the next room. His lowered voice signaled that he didn’t want the owners to know of his interest in the item in case the price went up. All I could discern, though, apart from an upright piano, was a sofa and matching armchairs upholstered in a hideous orange velour. He couldn’t possibly mean them, could he?

“The piano.” He beamed and then must have noticed my expression. “I’ve always wanted to learn, and it’s only $500.”

This was the first I’d heard of any desire on my husband’s part to study music. He rarely listened to it, as I was discovering, and had told me once he couldn’t carry a tune.

But right now, that wasn’t the point.

“We haven’t got anything to sit on yet. Why don’t we keep on looking while we think about it?” 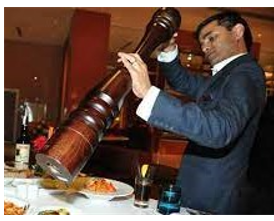 We wandered into the adjoining room where Jay spotted a pair of salt and pepper shakers. They were easy to spot, being of the size waiters use in a restaurant when they’re offering to pepper your plate of spaghetti. On the other hand, they were much less expensive than the alternative.

“Wow,” I said, then expressed some doubt. I figured if Jay felt he had to persuade me, he might feel a small sense of triumph and forget about music lessons.

He walked out with the giant shakers under his arm, perfectly happy.

I dragged out the story every time a guest raised an eyebrow at the sight of them. “Let me tell you how we ended up with these instead of a piano…”

We had the condiment set, but it looked ridiculous on the little table we were using. So a couple of weeks later, we drove up to Litchfield County, Connecticut’s antiques mecca. We noticed a store advertising English country pine and pulled in. The shop itself was disappointing, but the proprietor, a short cheerful woman in her fifties, took us out to her barn. Inside, the shadows made things hard to make out, but we found a table, half-hidden, in one corner. The pale gold planks which formed the top were only revealed when the owner dusted it off, releasing a cloud of motes into the sunlight now streaming through the door. Various scrapes and cuts had been scored into the surface, but they appeared genuine, not, as was often the case, added by unscrupulous dealers.

“Let me get you a yardstick.”

I’d written the room measurements on the back of our latest electricity bill, so while she and Jay measured and read out the results, I checked to make sure there’d be enough space for it. There was.

I loved it. We both did. Now the woman was pointing out a hutch on the other side of the barn.

It was attractive. Roughly as wide as the table was long, and the same color, but there was something off about it. “It’s not very tall for a Welsh dresser.”

She clearly understood this was Britspeak for “hutch”.

“It’s Irish,” she explained. Perhaps feeling this wasn’t explanation enough, she went on. “Well, um, I think someone may have cut it down a bit to fit a low-ceilinged cottage.”

Well-chosen words.  I pictured a small dwelling with a peat roof in County Kerry, though I’d never been to Ireland. It sounded romantic, though.

Jay and I looked at each other. I’d already checked out the price tags, and was sure we were way out of our league. Together, they’d come to $5,500. We had, so far as I knew, nothing like that amount to spare. I’d only broken even when I sold my house in Chicago and paid for the move. I was driving Jay’s old station wagon because we didn’t have the money for a new car.

“We can’t afford this,” I whispered.

“I’ll bet I can get them for less. And we should buy ourselves a wedding present, don’t you think?”

I’m sure he sensed I was beginning to waver. I might find a job soon, I mused, so we’d be able to pay for this. The pieces were lovely. And we’d have somewhere to put the giant salt and pepper shakers.

“Plus, we need a dining room table.”

He bargained her down to $5,000 with free delivery.

So began a pattern that continued throughout our married life.

Jay would find something he wanted to buy, which I considered too expensive. If I liked it too, though, I’d let him talk me into it. Only on the rare occasion I truly hated an item would I put up a fight. I’d recognized by then that my husband was even more stubborn than I, so I learned to avoid lost causes.

Generally, this worked out well. Though I still think we could have done without the wicker drinks trolley we never used, the fake fish that sang “don’t worry, be happy”, and the unlovely painting of a boy in a field – all of which Jay loved. 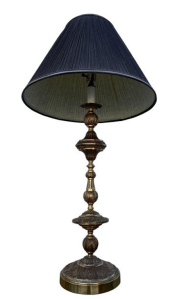 I did have one close shave. Jay had brought an ugly brass lamp from his old home, which I tried to refurbish with a lot of Brasso and elbow grease. None of it helped, and the lamp stood on a side table, as far out of sight as I could place it.

After a while, I moved it surreptitiously to the basement. Jay didn’t notice. So when the local high school was asking for donations for its annual giant sale, I stowed it in the trunk of my car, and donated it.

On the day of the sale, my only goal was to keep the champion shopper away from that part of town, but as he took a shortcut to get to the supermarket, I knew I was doomed.

I smiled gamely as he swerved into the school parking lot, and hoped I would be able to steer him away from the table with all the household odds and ends. It was not to be.

“Darling, look.” Jay’s whisper boomed in my ear. “We have a lamp just like that at home. If we bought this one, we’d have a pair.”

It took all my powers of persuasion to lead him away to something else. That may have been where we found the nightstand with the uneven bamboo legs…

An excerpt from my audiobook

Maggie Smith – Where I Write